The ThreatConnect® object model is based around two central concepts: associations and pivots. These two concepts express the navigations enabled by the Diamond Model of Intrusion Analysis.

The Diamond Model of Intrusion Analysis

The Diamond Model (Figure 1) is an elegant way to abstract the pieces of a cyberattack, although often only a subset of the four vertices—Adversary, Capabilities, Infrastructure, and Victim—is presented. For example, log-file analysis may indicate that a server (the Victim) was targeted by a Shellshock attack (the Capability) emanating from a Russian IP address (the Infrastructure). 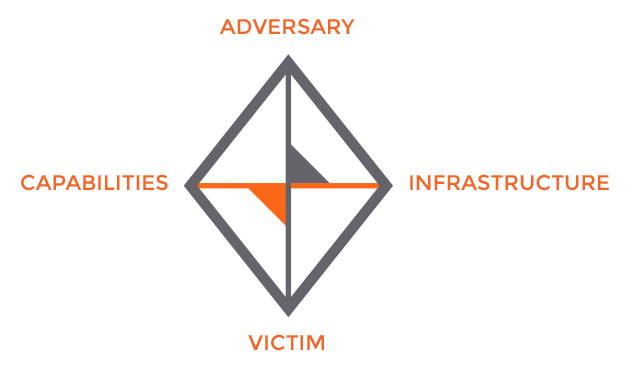 By assembling these puzzle pieces over time, it becomes easier to understand correlations in order to create complete Diamonds. That Russian IP address may have been linked to an advanced threat actor in an intelligence feed. That actor may have a long list of other known infrastructures, and Shellshock may be the precursor to further capabilities, which have been demonstrated by other Victims in a user’s industry sector.

The logical deductions derived from traversing the Diamond are referred to as pivots. They are a central part of conducting analysis within ThreatConnect and require that all of these vertices and edges be modeled appropriately.

For example, consider a breach in which malware within a company’s network is exfiltrating data to an IP address. In this example, certain fragments of the Diamond Model are already known: the Victim (the company), the Capabilities (the malware), and the Infrastructure (the IP address to which the malware calls out). These relationships can be modeled in ThreatConnect so that other members of a user’s Organization or Community can benefit from that user’s analysis. Figure 2 displays associations created between entities. 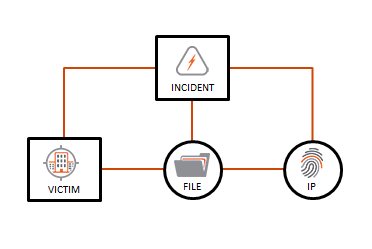 In this example, there are a total of five associations:

With these created associations, future analysis, both manual and automated, can uncover connections and correlations by conducting pivots across the dataset.

Modeling associations is of no use without any way to find the associations. Imagine that the foregoing Incident was contributed to a Community and that other analysts in the industry have discovered an entire group of activity based on the kernel of initial intelligence detailed previously. Thanks to the work of the Community as a whole, the EVILSAUCE Threat has been modeled as depicted in Figure 3. 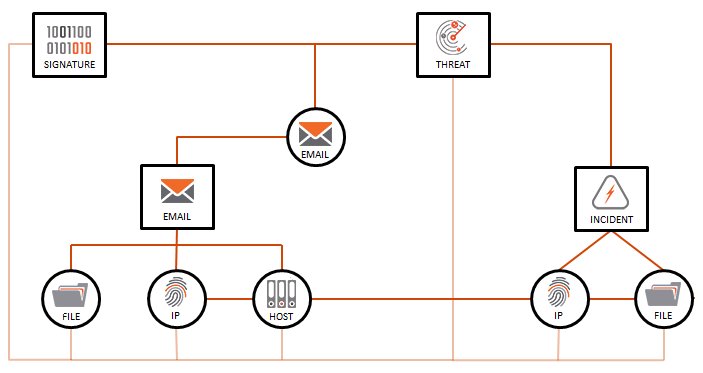 Based on collaborative analysis, the graph is now built further out because of the following chain of events:

Analysts can pivot manually through the dataset in order to discover relationships, and pivots can be chained to explore relationships and find correlations. Pivoting on Data details the way this pivoting can be conducted within ThreatConnect.

The example given in this article is a great model for manual pivots, because it enables analysts to find connections easily:

Pivots are also accessible programmatically via ThreatConnect’s Application Programming Interface (API), allowing software to traverse the graph in Figure 3 at impressive speeds and scales. This kind of pivoting can be carried out to answer interesting questions with software integrations:

The foregoing questions are sample pivots, articulated in everyday language, that are enabled by modeling content with associations.