icon in the upper-right corner of the Playbook Designer to configure the Playbook’s settings (Figure 1).

Use the dropdown menu to select the name of the user under which the Playbook should execute. This menu will be disabled if the Run as current user checkbox was enabled for a UserAction Trigger in the Playbook.

Use the dropdown menu to select the log level for the Playbook. Table 1 describes each log level, from least to most granular.

Log levels cascade; in other words, any log level will capture details at its own level and at all less granular log levels. For instance, INFO will capture WARN and ERROR messages, but exclude DEBUG and TRACE messages. Apps written in Python do not distinguish between DEBUG and TRACE log levels. Either can be used during Playbook design with the same effect.

Setting the log level for a Playbook App to DEBUG or TRACE activates input- and output-parameter value capture in the Input and Output tabs, respectively, for that App’s step in the Execution Details pane of the Executions screen for the Playbook (Figure 2 and Figure 3).

See Playbook Executions for more information on the Execution screen.

Use the dropdown menu to select the server or group of servers on which the Playbook should execute. If a private server is available to the user’s Organization, a lock icon will be displayed next to the server’s name. In a multi-tenant instance of ThreatConnect, private servers are dedicated instances on which users in an Organization can run a Playbook rather than have the Playbook execute through the queue of the pool of public servers (i.e., the Default Server Pool). Private servers should be used for Playbooks of priority or performance requirements that necessitate their execution outside of the Default Server Pool.

Enter the number of minutes of analyst time that will be saved with each execution of the Playbook in the Minutes box. Enter the hourly rate of the analyst in the Rate/Hour box. Every time the Playbook executes, these values will be used to calculate how much time and money were saved by executing the Playbook rather than having the analyst do the work manually. See Playbooks: Return on Investment for more information.

The Failure Notifications feature allows ThreatConnect users to specify email addresses that should receive an email if a Playbook fails to execute.

Note
If the Failure Notifications feature is not displayed in the Playbook Settings menu, contact your System Administrator to enable it.

Select the Enabled checkbox (Figure 1) to enable failure notifications. After this checkbox is selected, an Include Log Files checkbox and an Email text box will be displayed (Figure 4). 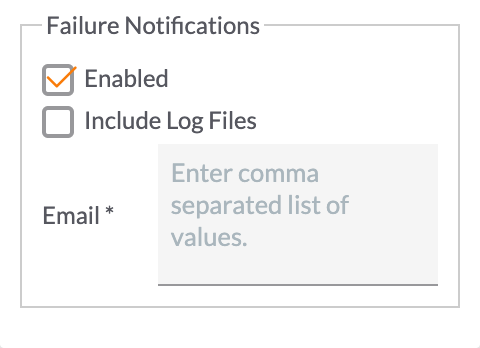